A survey shows Singapore firms are not well-placed to ride the Silverhaired wave. Only 17 per cent of companies say Singapore’s Silver-haired market is expanding and only 43 per cent have a serious strategy for this segment – despite a projected 372 per cent increase in the elderly population from 2000 to 2030 (making Singapore’s elderly population one of the fastest growing in the world). Only in the pharmaceuticals/food supplements industry do the great majority of companies have a serious Silver-haired strategy.

Ageing is inescapable, yet few advertisements feature people over 50. Why do companies find the senior citizen consumer uninteresting? Recent debate on raising the retirement age highlights the potential purchasing power of this segment and may enhance the attractiveness of this market.

Based on Department of Statistics June 2004 figures, approximately 24 per cent of Singapore residents are over 50 years old – making up the Silver-haired segment. While Asian countries like India – where 60 per cent of the population is less than 25 years old – have a largeyouth consumer group, others like Japan and Singapore have a mushrooming ageing population. 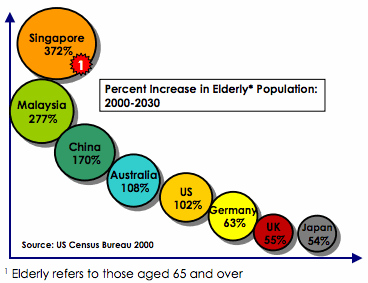 In spite of this, companies in Singapore do not seem excited with the prospects for the Silver-haired market, judging from a recent study of company strategy in Singapore by Spire Research and Consulting. Interviews were conducted with 30 leading and reputable companies operating in Singapore, spanning key industries like banking & investment, pharmaceutical & health supplements and lifestyle & leisure products.

Despite having one of the fastest growing elderly populations in the world, only 43 per cent of companies in Singapore have devised a Silver-haired marketing strategy. 94 per cent of those without such a strategy said they were not concerned to develop one in the next one to two years.

Silver-haired Market in the Banking and Investment Industry
55 per cent of banking and investment companies are focusing on Silver-haired consumers. For example, UOB has launched a savings account product yielding extra interest for consumers that are at least 55 years old, while British insurer Aviva sells an investment instrument for CPF members who turned 55 on or after 1 Jan 1999.

In contrast to the size of the segment, there appears to be a limited range of banking and investment products targeting Silver-haired consumers, who have access to significant liquidity (in the form of CPF savings) but limited risk appetite.

The study found that banking and investment companies:

According to one foreign bank that has launched a retirement product, “Silverhaired business will not be good”.

But as the Silver-haired population surges, the banking and investment industry is expected to develop more products tailored to the needs of seniors. For instance, one of the leading local banks OCBC has publicly stated that they are focusing on Silver-haired consumers and will launch a product aimed at the retirement segment.

The Silver-haired market is a traditional cash cow for the pharmaceutical and health food supplement industry. A remarkable 70 per cent of companies interviewed in this sector have existing marketing strategies targeting the Silverhaired segment and plan to strengthen these efforts.

Drivers of this trend include rising health consciousness and therapeutic needs from conditions affecting the elderly, like osteoporosis and stroke. The risk of stroke more than doubles every decades for people over 55 whilst majority who die of a stroke are over 65.

Silver-haired Market in Lifestyle and Leisure Products Industry
80 per cent of respondents in this industry cited that they would not have a Silverhaired consumer focus in the next two years, because a broad-based approach targeting all segments tends to be associated with higher profits.

Drivers of Silver-haired demand in this sector include family members wishing to take care of parents and older relatives, as well as growing health consciousness.

Conclusion – is the Silver-haired market the next big thing in Singapore’s consumer marketing?

Companies are shifting their attitudes towards Silver-haired consumers, by developing more age-specific products as well as sales and marketing tactics.

Some Singapore-based companies who have regional responsibilities are gearing up to the challenges of Silver-haired marketing in other Asian countries.40 per cent of respondents viewed Japan as the region’s largest Silver-haired market in the short-term while 30 per cent viewed China in this light. In Japan, one in four people will be over 65 years of age in a decade whereas China is projected to have 400 million senior citizens by 2030.

The growth in the elderly population and the findings of Spire’s study suggest substantial growth potential for products and services targeting the Silver-haired segment. The implications of this demographic revolution have yet to impact many product categories.

For example, Singapore and Japan are among the top ten nations in terms of the penetration of mobile phones with access to the Internet, but no mobile phone vendors have developed units with a larger screen or bigger buttons specifically for Silver-haired consumers in these markets. Nevertheless other leading mobile phone manufacturers are beginning to take this segment more seriously:

The Silver-haired market could well be the “next big thing” in Asian marketing. 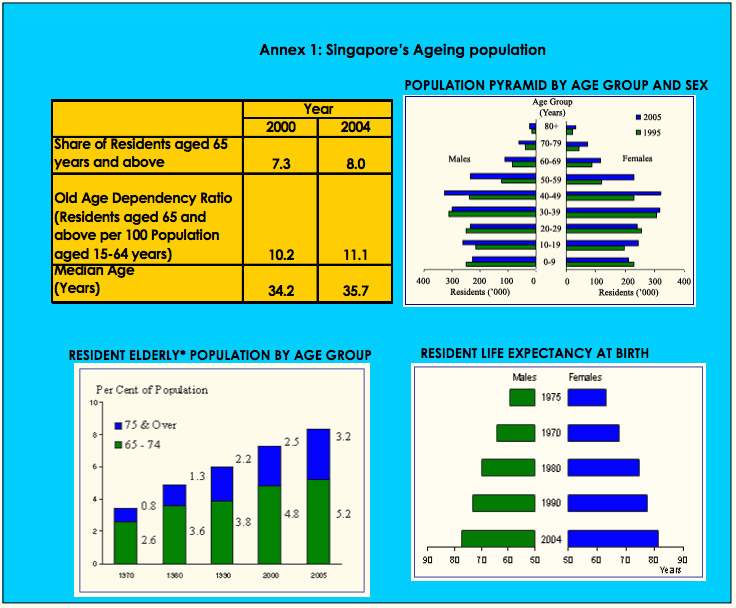 *Elderly refers to those aged 65 and over
Source: Singapore Department of Statistics