Asia’s leading strategic market intelligence consultancy looks into its crystal ball and predicts new trends in investment and energy that could change the economic landscape next year.

SPIRE Research and Consulting Group Managing Director Leon Perera said: “The regional economic landscape is undergoing a major transformation. We are seeing the emergence of several major trends that could revolutionize the business profile of countries in the region.”

Rising Manufacturing Hotspots
Spire’s research suggests that, while China will continue to be the most attractive manufacturing location in Asia by a wide margin, many international companies are quietly increasing production FDI into India and Vietnam, to diversify risks and tap into the domestic market in these countries.

Spire’s recent survey of 43 international manufacturing companies based in Singapore revealed that China is the most attractive location for manufacturing investment by a large margin, followed by Thailand, India, Malaysia and Vietnam.

In India, Special Economic Zones (SEZs) are being established at an astonishing rate to stimulate manufacturing investment. A selling point for Indian SEZs is the fact that more sectors are being allowed 100 percent foreign-owned equity in Indian-based ventures. As at April 2006, the Board of Approvals accepted more than 160 proposals for new SEZ projects. Investment in the infrastructure of SEZs is expected to exceed US$2 billion. Four industries that will be among the most promising drivers of SEZ investment in India are telecommunications, biotechnology, electronics and automotives. Nokia, for example, currently manufactures 10% of its global production of mobile phones in India. 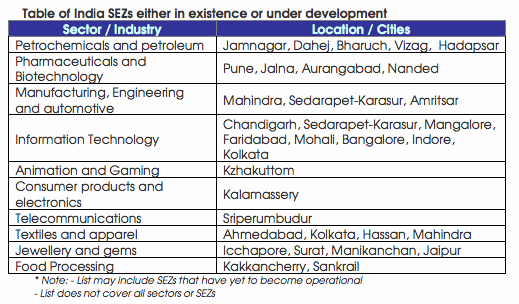 With entry into WTO likely in 2007 and its history of frequently being Asia’s secondfastest growing economy,Vietnam is poised to attract more manufacturing FDI from MNCs wary of placing too many eggs in the China basket. Some manufacturing giants currently operating production facilities in Vietnam include Canon, Yamaha Motor, ABB and Honda.

New economic trends and opportunities for businesses by specific countries and regions:

Regional Headquarters
Singapore’s position as the leading location for Regional Headquarters (RHQs) in the South/East Asia region is fairly secure. Going forward, Spire foresees more international companies establishing two Asian RHQs, one for North and one for South Asia, with Singapore, Hong Kong and to a lesser extent Thailand, Malaysia and China competing for these projects.

Spire’s research has shown that international companies in Asia are increasingly creating separate Regional Headquarters (RHQs) for north and south Asia. Singapore and Hong Kong are the two most attractive destinations.

Spire conducted a survey among 43 global manufacturing companies located in Singapore. It found that 72% of manufacturers ranked Singapore as the top location for RHQs, mainly because of infrastructure, political stability and availability of talent. Hong Kong, Thailand and China were seen as the main competing locations for Asian RHQs.

Interestingly many manufacturers are splitting the RHQ function into two zones, seeing Singapore as an ASEAN/South Asia RHQ, and Hong Kong as a North Asia RHQ. Hong Kong came second to Singapore. Hong Kong claims to host 1,167 RHQs as of 1 June 2005, compared to over 4,000 that conduct their global and regional functions in Singapore.

Thailand was ranked third as an RHQ location among respondents in the electronics and components industries, partly due to the Thai government’s efforts in supporting these industry clusters.

China was a surprisingly popular choice among electronics and IT industries. 30 global companies reportedly have their RHQs in Shanghai, including General Motors, Visteon and Fuji-Xerox.

The top three criteria businesses used in deciding the location for Regional Headquarters were infrastructure, political stability and availability of talent, respectively.

RHQs require global connectivity and the ability to act quickly, which in turn requires excellent IT, financial and transport capabilities – thus infrastructure was ranked very highly by the respondents. Political stability is crucial in selecting the location for any business but in particular for locating RHQs in the Asia Pacific region, which contains many countries with volatile political environments. Singapore’s peaceful, stable and secure physical environment, coupled with predictable governmental policy-making, enabled the republic to score highly on this attribute.

As the third most important criteria listed by respondents, the search for quality employees to work in RHQs has risen above the need to lower costs. The ability of nations to compete in the RHQ arena is clearly not a function of population size, but rather the size of the “quality talent pool.” Location proximity between RHQs and their manufacturing bases was also cited as a factor in RHQ location choice, as was travel mobility within and with other Asian countries.

In 2007-2010, Spire foresees explosive growth in the consumption and production of biofuels in Asia, particularly in Southeast Asia and India, albeit from a small base. Driven by government initiatives, the rising production, refining and use of biofuel are creating huge opportunities for firms in the automotive, energy, agri-business and
petrochemical sectors.

A key variety of biofuel that will see strong growth is jatropha curcas, a perennial & non-edible oil plant growing in tropical/sub-tropical climates, which has seeds with 30% – 50% oil content. The oil can be used to produce bio-diesel.

Many Asian countries aim to build up cultivation of Jatropha, or encourage refining of jatropha oil into bio-diesel, to benefit from the migration towards biofuels, while also encouraging use of biofuels in their own countries to reduce emissions.

Jatropha, and biofuels in general, represent an enormous opportunity for energy, agri-business and automotive companies.

In Asia, jatropha is being cultivated in China, India, Sri Lanka, Philippines, Thailand, Indonesia, Laos, Cambodia, Vietnam and New Guinea
Total production of jatropha in South-east Asia is reportedly 115m tons/year, in South Asia 121m tons/year and in China 7m tons/year.
Indonesia is poised to benefit from the growth of jatropha, as it possesses much cultivable land for this crop. Nippon Oil Corporation of Japan is planning a biodiesel plantation in Jambi, Indonesia with capacity of 30,000 tons a year. The Indonesia government has developed a five year plan to grow Jatropha to be used to develop biodiesel for domestic use.
India’s Petroleum Ministry estimates that by 2009 India will have around 3.1 million hectares of jatropha plantations, and will have identified another 4 million hectares of wasteland to grow the plant.
The rail line between Delhi and Mumbai is already planted with jatrophacurcas, and the train is also running on 15% - 20% of biodiesel. India’s Chattisgarh state intends to run all government vehicles on biodiesel.
The Philippine National Oil Corporation and Samsung of Korea are partnering on a 8.2 billion Peso (US$ 165m) project to grow jatropha in the Philippines.
Thailand’s Energy Ministry has developed a biodiesel road-map which targets biodiesel to make up 10% of total diesel consumption by 2012.

China is easily the world’s biggest market for solar energy, accounting for roughly three-quarters of the world’s new solar panel collector capacity (MW). The nearest ranked region is the whole of Europe, which accounts for about 10%.

China’s dominance in this space is mainly due to the huge size of its population. But even in per capita terms, China’s capacity of 6.7 kwth. per 1,000 inhabitants noplaces it in fifth place, which means it has overtaken the stagnating German market(6.4 kWth/1,000 inhabitants) during the last year.

Since 2000, China’s per capita solar panel installation has risen by 20% per annum and shows no sign of slowing. 90% of these systems are installed to heat water in private households, 10% in hospitals, schools and hotels. About 85% are flat-panel collectors with thermo siphon systems and 15% evacuated tube collectors. There is a trend towards higher quality flat-panel collectors with longer service life, especially for large showpiece projects. 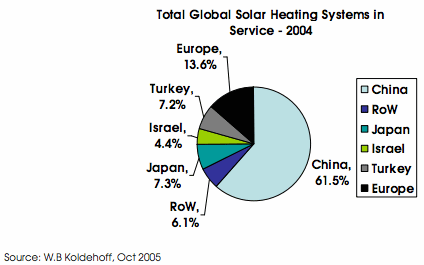