Counterfeits account for up to a quarter of unit sales and cause manufacturers to lose up to 28% of profit in Asia
A study conducted by Spire Research and Consulting has revealed that counterfeit products make up between 10% and 25% of unit sales in four key industries in Asia – luxury goods, automotive, pharmaceuticals and IT. Profits lost to counterfeits are estimated at between 13% (FMCG) and 28% (automotive). China is overwhelmingly cited as the No. 1 source of internationally traded counterfeits in Asia, followed at a distance by Hong Kong, Indonesia,Thailand and Korea. “The invasion of this bootleg industry from branded luxury products into everyday items like milk powder and over-the-counter medication has had devastating consequences with many unnecessary deaths,” said Leon Perera, Group Managing Director of Spire.

Consumers may well be aware of the rampant circulation of counterfeit Louis Vuitton or Hermès handbags and other luxury items. But in recent years, it is the appearance of fake everyday products in daily use such as shampoo or over–the-counter (otc) medication that is raising alarm bells.

The World Health Organization (WHO) has estimated that a fifth of the one million annual deaths from malaria could have been prevented if all medicines taken for it were genuine.

And the adoption of fake products is spreading to everyday, mundane household items. In China, over 200 babies were reported to have died from malnutrition in 2004 after being fed milk powders of inferior quality.

Based on customs seizures, the value of counterfeit goods traded internationally is estimated at nearly US$1.9 billion across 92 countries. However this figure represents only the tip of the iceberg, as it is an estimate based on customs seizures. Moreover, it excludes the large number of fakes produced and consumed within economies.The growing globalization of manufacturing will exacerbate the problem.

Many multi-national corporations (MNCs) locate their manufacturing facilities in Asia, primarily China, but also other countries in the region such as Thailand, Malaysia and Vietnam. Intellectual property – designs, molds, specifications – often pass through the hands of contractors, subcontractors and even factory operators, affording ample opportunities to for theft of IPR.

An analysis from the 30 member countries of the Organisation for Economic Cooperation and Development (OECD) shows that close to 60% of all seizures originated in China, Thailand, Hong Kong, South Korea and Malaysia. With other locations such as Indonesia and Philippines capturing an increasing share of the counterfeit production market, the scale and level of counterfeiting have crossed yet more borders (see Appendix A, fig. 1).

Spire Research and Consulting interviewed nearly 40 global companies operating in Asia on the increasing sophistication of counterfeit production over the last half decade.

The resulting insights include:

Counterfeits are present in almost every range of material goods. In fact at least 10% of volume sales are estimated to be counterfeits within the following product categories, with luxury goods currently still leading with 25% (see Appendix A, fig. 2):
Automotive – oil and air filters, general body parts (such as head lamps and bulbs), car suspensions, steering wheel and brake pads are most often counterfeited.
Around US$200 million is lost in sales of auto parts by South Korean Hyundai due to counterfeit parts made in China.
FMCG (Fast moving consumer goods) – sports brand clothing and accessories (including bags and shoes), medication/drugs, shampoo and skin-care products are key counterfeit targets.
The WHO estimates that over 30% of medicines in some areas of South East Asia are counterfeit. In wealthier countries, almost 50% of medicines sold online are thought to be counterfeit.
IT products – software programs e.g. Windows and Microsoft Office, ink and toner cartridges, computer hardware e.g. video cards, hard-disk drives.
Few software companies, both local and international, are able to flourish in Vietnam, where counterfeits account for over 90% of available software.
Luxury products – leather products (e.g. bags, belts and key chains), watches and clothes are heavily counterfeited. Even though China dominates the fake luxury goods market in Asia, South Korea and Hong Kong are reputed to produce higher-quality counterfeits.
Interestingly, the traditional Korean dexterity in handicraft production has helped counterfeiters produce or copy luxury items efficiently.
The estimated average profit lost to counterfeits for each category across the countries is as follows:

Advancements in technology are the main factor that has improved the quality of counterfeits in the luxury and automotive parts industries:
It has become easier to consistently produce goods like apparels and accessories of a higher quality.
Original designs can be effortlessly and more cheaply copied with the use of advances in scanning, printing, 3-D modeling, and other tools of reverse-engineering (please see Appendix B).
Technology has also contributed to the significant shortening of lag time between the original product launch and the availability of the counterfeit products.
In some cases, the counterfeit producers can actually complete the product manufacturing before the original producer officially launches. One recent example would be the sale of Playstation 3 consoles in Asia last year, before Sony’s official regional launch in 2007.
The business strategy of counterfeiters is evolving to become more efficient to avoid detection, with about 25% working from home operations to carry out manufacturing, mail orders and product distribution.
Early this year, a 24-year-old woman was sentenced to a 6-month jail term in Singapore for trying to sell fake Gucci, Chanel and Louis Vuitton items online.

The liberalization of trade barriers between countries has led to an increase in counterfeiting. Consistent and organized efforts are necessary at the international level to deal with the issue. China, for one, has taken strict measures – last year, the State Drug Administration clamped down on over a thousand illegal factories and investigated cases of counterfeit drugs worth US$ 57million. 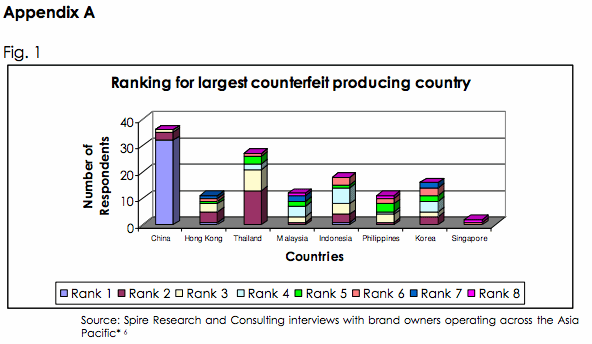 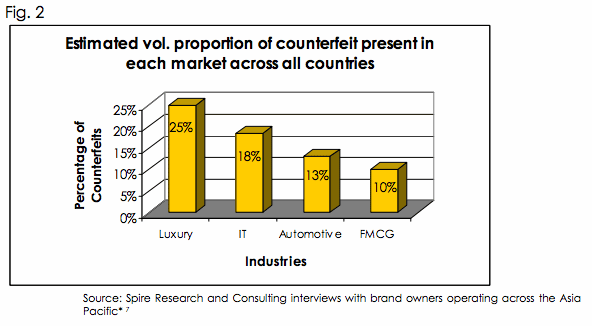 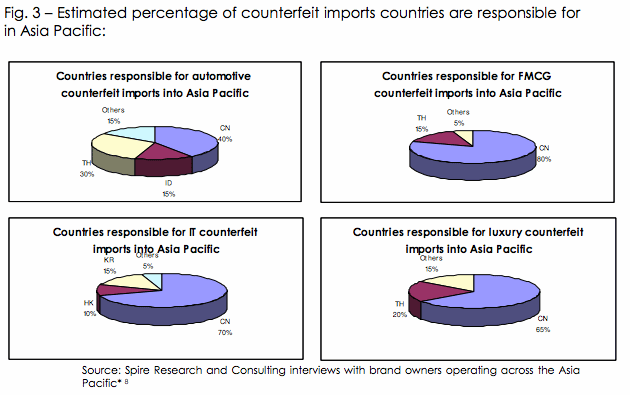 Underground factories to produce fakes using reverse-engineering, usually riding on cheap labour and materials of low quality.
Production centres are small and usually situated in developing countries close to the ports where transportation of goods is convenient.
Many recycle ill-gotten original packaging for use with the counterfeits produced.
“Third shift” in legitimate facilities where extra volume of the original item is produced using inferior supplies, to be sold in black markets.
Production is done after normal working hours, through the night.
The excess products are manufactured without the awareness of the original brand company.