1. An overview: Energy Sector in Vietnam

With a population of around 97 million, Vietnam is the third most populous country in South East Asia after Indonesia and Philippines. The country transformed from one of the world’s poorest nations to a developing country over the past few decades and is now on its way to become a middle-income, industrialized country in the coming years.

Industrialization and economic modernization will lead to increased energy demand, expected to increase by 10 per cent annually during 2016-2020 and 8 per cent per annum during 2021-2030. The total installed capacity of Vietnam was 47,750 MW till November 2018, with hydropower taking up 40.2 per cent of the share. 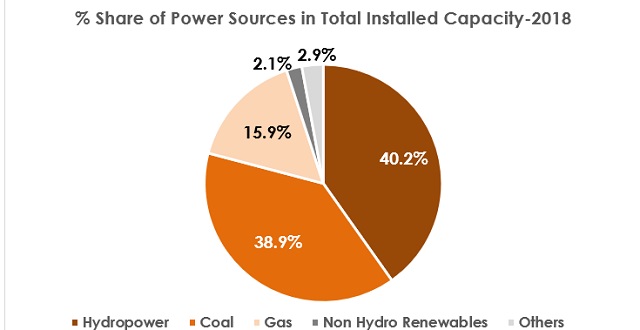 Launched by the Government of Vietnam, The National Power Development Master Plan (PHP 7) is set to meet the growing demand. The main emphasis to meet the growing energy demand was on coal, expected to increase in total energy supply share from 33 per cent in 2016 to 56 per cent in 2030. However, in 2016, the government launched a revised version of PHP 7 with an objective of shifting the focus from coal fired power generation to renewable energy to ensure energy security, climate change mitigation, environmental protection, and sustainable socio-economic development

Currently, hydropower holds the largest share amongst all renewable energy sources followed by biomass and wind. Other sources such as solar energy, biogas, and waste-to-energy technologies have also started to pick up whereas geothermal energy and tidal energy are still at a nascent stage. The government aims to increase electricity output produced from renewable sources from approximately 58 million MWh in 2015 to 101 million MWh by 2020 and 186 million MWh by 2030. 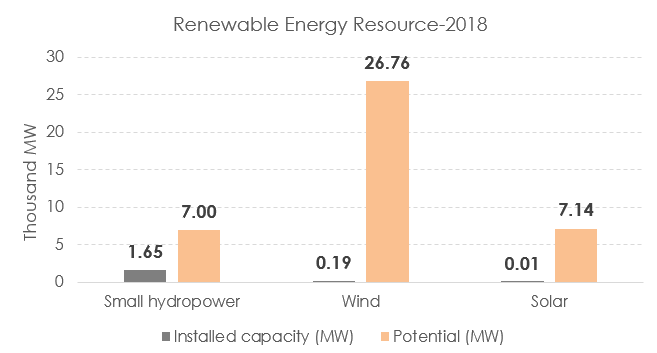 The south-central province of Ninh Thuan has the highest potential for Solar power generation, with over 140 projects. Other provinces with good Solar potential include Binh Thuan, Daklak, and Khanh Hoa, which attracted 100, 13 and 12 projects respectively.

The feed-in-tariff for Solar power is as follows:

A feed-in-tariff of US cents 9.35 per kWh is applicable for all on-grid solar power projects that achieve their commercial operation date (COD) prior to 30 June 2019 (except projects in Ninh Thuan province).
Proposed new tariffs are currently under discussion for projects from 1 July 2019 through 30 June 2021. The new tariffs may range from around US cents 7 per kWh to US cents 11 per kWh, depending on the type and location of the project.

At the same time, Solar power faces challenges. The government needs to be more consistent with pricing policy and Commercial Operation Date (COD) deadlines need to be extended beyond 2019 as project processes and land acquisitions cause delays.

Vietnam’s location in the monsoonal region, spread over a coastline of over 3,000km, provides ample potential for wind energy. South Central regions and the Mekong Delta provide the highest potential of harnessing wind energy at an average wind speed of 7 m/s or more. The total installed wind capacity is only 0.2 GW in the country but the potential can reach about 27 GW.

As of September 2018, only 200 MW of wind power has been installed, while close to 100 MW is currently under construction.

The feed-in-tariff for wind power is: 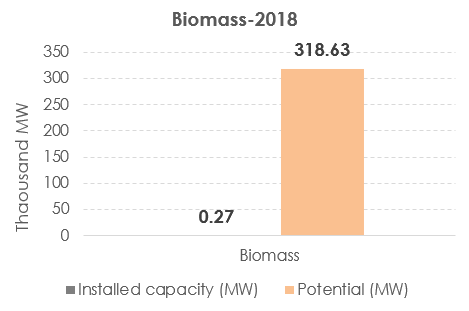 In 2018, 38 sugar mills across the nation were using biomass for electricity and heat production, with a total capacity of around 353MW. Apart from agricultural waste, municipal solid waste is also a good biomass source.

At present, Vietnam generates over 28 million tonnes of waste annually – out of which 76 per cent is disposed in landfills. The country has the potential to produce around 1 million MWh in 2020 and 6 million MWh in 2050 from this waste.

The feed-in-tariff for biomass is:

US cents 5.8 per kWh (Combined Heat Power Technology).
US cents 7.3 – 7.5 per kWh (avoided cost tariff for other technologies).

The major challenges with biomass energy production include:

Scattered residue with no reliable waste disposal system in place.
Lack of information on bio-energy technologies and perception of steep investment costs for biomass plants.

In 2016, the government approved the revised National Power Development Master Plan (PDP 7), between the years 2011-2020, with a vision for 2030. The main objective of this plan was to increase the share of non-hydro renewable energy to 7 per cent by 2020 and more than 10 per cent by 2030, from the current ~5 per cent share. The plan further aims to reduce the country’s dependency on hydropower in the coming years from around 40 per cent in 2018 to 15 per cent in 2030. 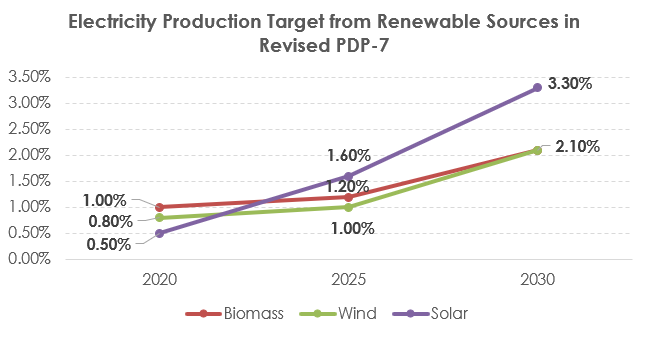 According to Vietnam Electricity (EVN’s) estimates, to meet growing power demand in the country, it would need to spend close to USD150 billion by 2030. The funding needed for the renewable energy sector would be around USD24 billion by 2030.

Other benefits offered by the government for renewable energy projects are:

The most effective way of entering the Vietnam market is through a PPP, as this form of vehicle helps to minimize risks from low feed-in-tariffs and high production costs. The term for a PPP is 20 years from the COD.

Import duty exemption for imported goods to establish fixed assets, materials and semi-finished products.
Tax incentives, which include preferential a Corporate Income Tax (CIT) rate of 10 per cent for 15 years; CIT exemption for four years; and a reduction of 50 per cent for the following nine years.
The government has also approved electricity prices (avoided-cost tariffs, Feed-in Tariffs) for on-grid renewable energy, including standardized power purchase contracts (20 years) for each renewable power type, to ensure consistent returns for investors.
EVN, the sole buyer of electricity, has been mandated to prioritize renewable energy.
Other incentives include preferential credit loans, land use tax exemption and land rental exemption.
About Spire Research and Consulting